What determines our values in today's fast-changing world? Who imprints its values on our conscience?  Do parents? Teachers? The Media? Or our omnipotent God?

It depends! In former times, the Christian conscience played a leading role in American schools and families. Parents who trusted God treasured His Word and taught it to their children. With His Word imprinted on their conscience, they would know whom to follow when faced with a challenge.

We live in a new era! The Bible-trained conscience has largely been replaced by contrary guidelines that twist, scorn or deny God's truth. Some still point to a conscience, but most people redefine it to match today's cultural values and personal inclinations. These examples illustrate the diversity:

:  "Our concept of governing is...a concept deeply rooted in a set of beliefs firmly etched in the national conscience..."[3] Barbara Jordan : "No art passes our conscience in the way film does, and goes directly to our feelings, deep down into the dark rooms of our souls."[4] Ingmar Bergman : "What a man calls his 'conscience' is merely the mental action that follows a sentimental reaction after too much wine or love."[5] Helen Rowland (Christian or not): "The conscience of children is formed by the influences that surround them...."[6] Jean Paul  Richter

In stark contrast to the above, Martin Luther dared take a stand against the reign of a corrupt and oppressive church back in April 1521. For his uncompromising faith, he was declared an outlaw on May 25. You may remember his words:

"...it is neither safe nor wise to do anything against conscience. Here I stand. I can do no other. God help me. Amen."[7]

Back in the 1930s, Adolph Hitler was determined to quench that Bible-trained conscience. It clashed with his Nazi agenda. In two separate speeches he said:

"Your child belongs to us already.... What are you? You will pass on. Your descendants, however, now stand in the next camp. In a short time they will know nothing else but this community." (1933)

"This new Reich will give its youth to no one, but will itself take youth and give to youth its own education and its own upbringing."(1937)[8]

In the stormy wake of change, all German children were forced to attend government schools. Their minds were steeped in the proud, self-assertive, anti-family values established by the Nazi government! The "Hitler Youth" and other training camps would seal the new loyalties and create a generation that felt no guilt when exercising their power to torture, kill and destroy.

And now, in the fading light of the Biblical conscience, America is headed in the same direction.

"The Nazi tyrant knew, as all dictators do, that the home, left to its own devices, is a far worse threat to state ideology than any foreign power. ... [F]orced attendance at school...is to control the thoughts of the next generation.... "[9]

True liberty depends on our relationship with our heavenly Father! When He draws us to Himself and fills us with His Spirit, His guidelines are stamped on our conscience as we "feed on" His Word and heed His "voice." But those who ignore that "voice" will be left with the ever-changing values of an increasingly corrupt world system. What would you choose?

A Conscience Built on Global Values

Back in 1997, our friend, Carl Teichrib, publisher of the excellent Internet magazine Forcing Change, attended the Global Citizenship 2000 Youth Congress in Vancouver, B.C. He taped the sessions, then wrote an article that exposed its "successful" efforts to please its pagan "god." The words below may seem silly, but this was a serious matter to those earnest but misdirected youths.

Setting the stage, a group of young women performed a skit to dramatize the new meaning of citizenship. One of them held pine branches in her hands. "Welcome to the Council of Human Beings," she began. "I represent Mother Earth."

In turn, the others laid their hands on her and confessed their environmental sins:

"I am guilty of wasting water when I'm brushing my teeth, letting the water run, and having long showers."

"I am guilty of killing animals by buying and wearing leather sandals."

"I am guilty of polluting the environment when I'm fully aware of the oil leak in my dad's car."

"I am guilty of supporting the destruction of East Timor by buying jewelry and blankets made in Indonesia."

"Mother Earth" (ME) acknowledged each confession with a brief, "I hear you," then posed the next challenge: "How can you heal ME?"

"I can stop wasting water by only taking what I need," said the first repentant sinner.

Through public repentance, they honored "Mother Earth" and showed their good intentions. One woman wept as she confessed her sin of giving birth to too many children. At the end, the group received a hearty applause.

Robert Muller, the former Assistant Secretary-General of the UN, helped organize that Global Citizenship 2000 Youth Congress. Sponsored by the International Foundation of Learning, it challenged 14 teams of student leaders to design Millennium projects that would be used to inspire students, teachers, mentors and politicians everywhere. I doubt that any true Christian voice was heard.

As Muller suggested, "Change the values and take a different course of living, then evolution will continue!"[11]

"Now the Spirit expressly says that in latter times some will depart from the faith, giving heed to deceiving spirits and doctrines of demons, speaking lies in hypocrisy, having their own conscience seared...." (1 Timothy 4:1-2)

The Spiritual War behind the World's changeable Conscience

Few leading globalists have more effectively advanced the new anti-Christian conscience than Robert Muller, who led the design team for UNESCO's Global Education Project. America has been a partner from the start, though it usually led from behind the scenes.

Muller's World Core Curriculum was inspired by Theosophy and its most familiar pupil Alice Bailey who channeled her Tibetan spirit guide, "Djwhal Khjul." Of course, Khjul had countless other disciples. Among them was Corinne McLaughlin, the first task force coordinator for the Clinton's "President's Council on Sustainable Development." She also taught her occult strategies at the Department of Education, the Pentagon and the EPA.

"There really is only one sin -- separateness," McLaughlin states in her book, Spiritual Politics. "War is more likely to spring from rampant nationalism, ethnocentrism, and intolerant religious fundamentalism -- all extreme and separative attitudes ...."

Her solution? The same as Clinton's: "What is needed as a cure for separateness is a deep sense of community -- that we're all in this together." That envisioned community is being designed top-down. The blueprint comes straight from the United Nations through countless UN affiliated governmental and non-governmental networks -- all working together to turn your town into a 21st century "sustainable community."

Another Theosophical guide to American schools was Dr. Shirley McCune, the Senior Director with the mid-continent Regional Educational Laboratory. She has worked with the National Education Association (NEA), the US Department of Education, Kansas Schools for the Twenty-First Century and various other states and agencies. Tutored by her spirit guides, she co-authored a strange book called The Light Shall Set You Free. In it, she quotes her demonic mentor Kuthumi, who introduces himself as a "World Teacher."

[13] Sounds like a bizarre fantasy, doesn’t it? Theosophy fits the agenda of countless elite world leaders, some of whom I've met at various UN conferences.[14] By channeling "ascended masters" (spirit guides such as Djwhal Khjul and Kuthumi), they connect with demonic spirits that have led countless global elites toward their vision of spiritual evolution.

In McCune's book, her spirit guide Kuthumi describes a "transformation process" and "the return of 'the Creator of Light' ... the source of power for which each soul has yearned since the beginning of time." Those yearning souls, of course, do not include you or me. He is referring to the "highly evolved" souls. As for the rest of us, they predict trouble ahead:

"The Earth will be cleansed in the next decade, for the purification must be complete."[12]

Of course, Kuthumi's prophecy failed to come true. But such strange occult language from cultural, political and educational leaders challenges our Western minds. It clashes with the world we know. Though young minds may be nurtured on violent fantasies, relatively few show concern.  After all, the realm of demons doesn't fit our secular "science"-based universe.

Yet, in the light of the Bible, it makes sense. "The whole world is under the sway of the evil one," we are told in 1 John 5:19. So it’s not surprising that Dr. McCune, Mr. Walsch, Mikhail Gorbachev and George Lucas all promote the same dark forces masquerading as benevolent light.

"For Satan himself transforms himself into an angel of light."  2 Corinthians 11:14

On November 2, 1989, Shirley McCune spoke at an education conference titled "School, Goals and the 1990s." Ponder her agenda:

"It seems to me that far too much of our efforts have been focused on the issue of let's find a short term fix... rather than... understanding that what we are about is total restructuring of our society.  What's happening in America today....  What it amounts to is a total transformation of our society.  We have moved into a new era...

"But what I'm not sure we have really begun to comprehend and act on sufficiently is the incredible amount of organizational restructuring and human development restructuring.... So we have to anticipate what the future is.... What we are facing is total restructuring of society....

"...we no longer are teaching facts to children.... The issue for most children and the issue for society...is that we no longer see the teaching of facts and information as the primary outcome of education."[15] Without a factual foundation, what kind of knowledge will guide our children? Whose values will reign in the times ahead? As God warns us,

"...to those who are defiled and unbelieving nothing is pure; 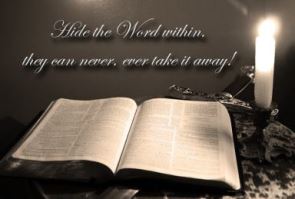 We can expect an explosion of this kind of occultism, for the network of world leaders that embrace such deceptions is growing fast. So are its followers around the world. Their plans are disturbing, to say the least!

But in the midst of it all, our God reigns!  And if we wear His spiritual Armor, He will protect us! Those who trust and follow Him can count on His wonderful promises! Our Lord and Shepherd will surely provide the strength and guidance needed in the times ahead!

"...let us draw near with a true heart in full assurance of faith, having our hearts sprinkled from an evil conscience..." Hebrews 10:22

"...this is commendable, if because of conscience toward God one endures grief, suffering wrongfully. ... For to this you were called, because Christ also suffered for us, leaving us an example, that you should follow His steps." 1 Peter 2:19, 21

1. Education for International Co-operation and Peace at the Primary-School Level (Switzerland: UNESCO, 1983).

6. "The Conscience of Children," at National Character Education Center (I couldn't find any other relevant data.)

8. William L. Shirer, The Rise And Fall Of The Third Reich: A History of Nazi Germany ,1959 (Amazon)

12. Corinne McLaughlin and Gordon Davidson, Spiritual Politics (New York: Ballantine Books, 1994),147. See "Local Agenda 21" at our web site. Corinne McLaughlin listed her experiences while conducting a workshop attended by Berit during a 50th anniversary celebration for the United Nations titled "Celebrating the Spirit" at the University of California at Berkeley, June 19-21, 1995.

14. During the nineties, I had the opportunity to travel as a registered reporter to many UN and related conferences and explore these issues. You can read some of the reports here: The U.N. Plan For Global Control: The Habitat II Agenda,

Gorbachev's Plan For A United World, The State of the World according to Gorbachev.