I have learned through many years in ministry that Americans tend to yawn about troubling events that are thousands of miles away. The busyness of life causes many to have a limited focus on the world and its troubles. And so it is with the conflict in Gaza. Yes, this war is part of the everlasting hatred that began thousands of years ago. These wars will go on until the Lord returns.  But let me bring the issue closer to home.

The New York Sun reports that contrary to the long held belief that Hamas "only" seeks the destruction of Israel, America is anything but safe from the terror group's wrath. Hamas leader Ismail Elbarasse was arrested a year ago after authorities witnessed his wife videotaping Maryland's Chesapeake Bay Bridge from the SUV. The images captured by Elbarasse's wife included close-ups of cables and other features "integral to the structural integrity of the bridge."

The response in America to this is almost casual indifference! Hamas has talked of expanding its operations to include American targets, and they continue their close association with Iran and Syria.

FBI agents in America have expressed serious concern stating Hamas has the capacity to carry out attacks on American soil.  Hamas sees America as an accomplice to the Israeli enemy.

Many also forget the attack on the Marine barracks in Lebanon in 1983 perpetrated by Hezbollah and Hamas.

Nonetheless, many in the Western world side with the brutal terrorist regime of Hamas and call Israel the "new Nazis." By now most on the Internet have seen the clips of demonstrators telling the Jews to go back to the ovens. While Muslims are clearly participating, they are joined by many non-Muslims including liberal clergy. You can view one of these demonstrations in a short 90-second clip here.

It seems ironic that much of the "oven" outcry is coming from Muslims in the Western world. But they are the ones who deny a Holocaust ever happened! Fatah leader Mahmoud Abbas earned his PhD with his paper that the Holocaust was a myth.

Still the world and the media have sympathy for the devil and once again we have evil being called good; that is, the Hamas terrorists are "good" because they have small weapons and Israel is bad because they have nukes.  When Russia invaded Georgia, did you see world demonstrations? After the Mumbai attacks in India, did you see any outcry?  No, they are reserved for all things Jewish. Few bat an eye over signs saying "Hitler did a good job."

Sadly, a wing of the church is weighing in with nasty protests as well. Joining the condemnation of Israel is the Evangelical Lutheran Church in America (ELCA). Their early January fact-finding trip compared Israel to the Nazis. President of the Lutheran World Federation, Mark Hanson, also pushed for a propaganda campaign against Christians who stand by Israel. In partnership with other liberal churches, Hanson is leading the effort to demonize Christian friends of Israel....

As Mark Steyn says, this is a spreading sickness.  It is also a fulfillment of Bible prophecy as the Bible stresses the last days' persecution of both Christians and Jews.  And it is the precursor to Zechariah's prophecy that some day, probably sooner rather than later, all nations will abandon Israel.

That is what makes the ELCA's little temper tantrum a travesty as they even object to a sliver of Christianity who, through thick or thin, stand by God's land and people.

Comment by Theresa: Please note the words "a dangerous and radical political movement." This is not very far from calling them political subversives or political dissidents. And it could be stretched to imply that they are potential domestic terrorists.

Because of disagreement about how to treat Israel, people who call themselves Christians are saying things that could result in having Christians face hardships that are a form of persecution. And that is before the hate crimes bill is passed by Congress.

It's happening so fast. But God is faithful. And His grace is sufficient. As Corrie ten Boom said, "Never be afraid to trust an unknown future to a known God."

Compare the vast extent of the Islamic land mass (this map shows only a portion of the whole) to the small red area that indicates Israel with the Palestinian territories. The small unlabeled country on its northern border is Lebanon, which also embraces Islam. 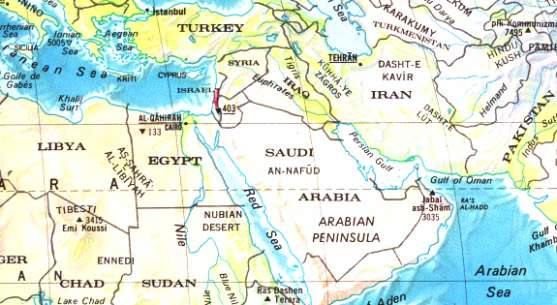 Other articles by Jan Markell:

Wait -- the Outrage Isn't Over

Inaugural Prayer to the God of Our Many Understandings!

Wait -- the Outrage Isn't Over

Footprints of a Prophet or Tracks of a Wolf?

Are Evangelical pulpits about to praise Islam?

Home - Articles - Victory - The Armor of God - Transforming the Church