"Around the world, presidents, state officials...terrorists and even ordinary citizens are trying to stop the spread of the Christian faith."[1] Voice of the Martyrs

"The school...told the Cub Scouts this week that their flyer cannot be distributed because it mentions God."[2] School Boots Boy Scouts for Mother Earth

"A formal investigation of several Christian organizations has been launched by PayPal. ...homosexual activists...are demanding that people with biblical perspectives...be shut down."[3] Christian websites suddenly probed by surprising source

"...all who desire to live godly in Christ Jesus will suffer persecution. But evil men and impostors will grow worse and worse, deceiving and being deceived. "2 Tim 3:12-13 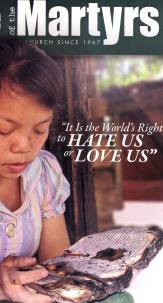 Life was hard for the young Christian woman in communist Laos. Despised for her uncompromising faith, she stood alone in her village. But she loved God's Word and could always talk with her best Friend, Jesus. One day some villagers burned her precious Bible. After the flames died out, she pulled her blackened treasure out of the ashes. Then God comforted her through the pages He had preserved for her.

Later, when the director of "The Voice of the Martyrs" visited Laos, he met with her secretly. She shared her plight and her joy:

"My villagers still hate me and mock me like they mocked Jesus on the cross. It is the world's right to hate us or love us. But for me, I will follow Jesus because I read in the Bible what He says, that the world will hate you."[1]

Such hatred is real -- even in America!

The war on Biblical Christianity is spreading like wildfire. After a period of relief from violent rage and overt occultism, the dark forces that flourished centuries ago are again spreading deception in plain sight. Our children's minds are prime targets! Are they prepared to resist it?

The foundations for today's battles were laid by elite western leaders long ago. Many were steeped in the occult visions of high level freemasonry, rosicrucianism [5]), theosophy, and the teachings of Skull and Bones and other secret societies. Their corrupt goals have tarnished every branch of Western society: education, the news and entertainment media -- even churches.

A century ago, the Fabian socialist John Dewey and his legion of "change agents" inspired an educational revolution designed to rewrite "history" and crush our moral foundations. Working within the National Education Association (NEA) they replaced objective learning with the "enlightened social engineering" needed to fulfill their dream of a collective "Brave New Word" with a universal anti-Christian religion. Their words expose their plans:

"The purpose of education and the schools is to change the thoughts, feelings and actions of students."[6] Professor Benjamin Bloom, "Father of Outcome-based Education"

"Our schools...are promoting the social unity out of which in the end genuine religious unity must grow. ...dogmatic beliefs...[are] disappearing."[7] John Dewey,  co-author of the first Humanist Manifesto

"[Every child in America entering schools at the age of five is insane because he comes to schools with certain allegiances toward our founding fathers, toward his parents, toward a belief in a supernatural being..."[8] Chester Pierce, Professor of Education and Psychiatry at Harvard.

"The Protestant Ethic will atrophy as more and more enjoy varied leisure and guaranteed sustenance....Most people will tend to be hedonistic."[9] Behavioral Science Teacher Education Program (B-STEP), Dept. of Health, Education and Welfare.

Those goals have now been met in schools and communities across the country. Tuned to this new amoral world, most youths will never know what they've lost. That was part of the plan. Though the "guaranteed sustenance" has lost its certainty, it served its purpose. The hedonism is here to stay. Our nation is facing the consequences of rejecting God and trusting the blinded human puppets of our invisible foe.

We shouldn't be surprised! Remember, "the whole world is under the sway of the evil one." 1 John 5:19

And what a cruel deceiver he is! This unseen tyrant and his visible minions are sowing seeds of deception and bondage more effectively than ever before. In this subversive setting, power rules -- and the strongest are rarely compassionate.

But our God still reigns. He may be withdrawing His abundant blessings from this land, but He never stops caring for those who trust and follow Him! So we can confidently say to Him:

The Offense of the Gospel

Last week I received an email from a young Wiccan fan of a website for those who love horses and magic. She felt "insulted" by a warning I had posted. It was written by a concerned Christian mom and included these lines:

"...the program said they could make their horse 'immortal.' This seemed peculiar.... I saw that players could earn 'karma' points. This was getting more disturbing. The software company name was 'Owlient.' I wondered why owls would be associated with a horse game...

"...every link was the name of mythological gods/goddesses. Names included Morpheus, Fertility, Aphrodite, Zeus, Medusa...and a statement that said, 'A God that grants your horses stamina and speed...' Yes, the G was capitalized."

The young Wiccan saw nothing "evil" on that website. In contrast, I saw all kinds of occult suggestions that could blind our children to God's warnings.

are still legal in America! But the Hate Crimes Prevention Act of 2009 has narrowed the legal boundaries for "free speech." No longer can we count on the Constitutional rights guaranteed by the First Amendment.

For example, 14-year old Dakota Ary, an honor student at a Fort Worth high school, faced suspension and a blot on his record when he made this supposedly "anti-gay" remark to his friend sitting behind him:

The teacher (who had put a picture of two men kissing on the back wall) heard the comment and was enraged. From his perspective, Ary had no right to express his personal moral opinion. So the family sought help from a Christian lawyer, and the crisis was resolved. But such battles are likely to multiply -- thus intimidating most students into silence or compliance.

Why is this happening? Because (let me say it again) the world system is "under the sway of the evil one" and his captivated servants. God's eternal Truth is incompatible with the blinding oppression of the evil one!

Take a look at the UNESCO's Declaration of Principles on Tolerance. It outlines today's global standard for the tolerance that we must show those whose values clash with our Christian faith. Our globalist leaders decided long ago that Biblical values would be incompatible with their envisioned pluralism:

From the UN perspective, this would be considered international law. [the words in brackets below are mine]:

The last point seems to equate Christianity with violence. Apparently, UNESCO's elite leaders consider Biblical Christianity unworthy of either tolerance or protection from those who despise it.

In 1946, Dr. Brock Chisholm, a Canadian psychiatrist, presented a paper entitled The Psychiatry of Enduring Peace and Social Progress at a US conference on mental health. Soon to become the first Secretary General of the World Health Organization (WHO), he spelled out its global agenda:

"Can we identify the reasons why we fight wars...? Many of them are easy to list -- prejudice, isolationism, the ability to emotionally and uncritically believe unreasonable things....The only psychological force capable of producing these perversions is morality, the concept of right and wrong...

"For many generations we have bowed our necks to the yoke of the conviction of sin. We have swallowed all manner of poisonous certainties fed us by our parents....Individuals who have emotional disabilities...are certain to project their hates on to others....

"There is something to be said...for gently putting aside the mistaken old ways of our elders if that is possible. If it cannot be done gently, it may have to be done roughly or even violently."[13]

Chisholm's report was published both in the prestigious magazine Psychiatry and by his Communist friend, Alger Hiss, the publisher of the socialist magazine International Conciliation. Hiss, then president of the Carnegie Endowment for International Peace, wrote the Preface to Chisholm's paper.

Since "gradualism" has been key to this global transformation, we may not notice the changes. Like the proverbial frog in a pot of water, we simply adapt to the "temperature" of the moment. By the time the water boils, it's too late to escape. Here's a quick reminder of where we once were:

Individual thinking, diligence, trusting God and each other.

Based on the Bible (unchanging truth)

Based on human wants (changeable)

By the people, led by God's guidelines

By elitists who control the media, money and masses

Of course, many are delighted with this degrading "progress." Freed from traditional boundaries and a God-given conscience, they applaud the spreading war on God's unbending Word. Consider these travesties:

Houston Cemetery Bans the Word 'God' from Military Funerals: "The director of the Houston [Veterans Administration]...has ordered the burial teams to instruct that religious references, as well as prayer, are no longer to be included as part of the burial services. ...the mention of 'God' is not allowed."[14]

Christian Photographer Sued by Same-Sex Couple: "A Christian photographer in New Mexico was found guilty last week of breaking state law for refusing to take pictures of a lesbian ceremony.... [The] couple filed a complaint for discrimination against their sexual orientation. ...the state commission ruled that Huguenin [the faithful Christian] violated the state's Human Rights Act."[15]

Banished! City forbids Bible studies in homes: "[Gilbert, Arizona] had ordered a group of seven adults to stop gathering for Bible studies in a private home because such meetings are forbidden by the city's zoning codes...'"[16] Christian lawyers helped reverse that unconstitutional law

Today's threats and changes have opened the door -- both socially and "legally" -- to oppression and injustice toward peaceful Christians. That's not a new predicament in the historical record, but few anticipated it in America -- "the land of the free."

"As political and economic freedom...diminishes, sexual freedom tends compensatingly [sic] to increase. And the dictator...will do well to encourage that freedom. ...it will help to reconcile his subjects to the servitude."[17]

Are we prepared to stand firm in Christ through the storms ahead? Are our children "putting on" The Armor of God? Remember, this spiritual war is not "against flesh and blood"--

"but against principalities, against powers, against the rulers of the darkness of this age, against spiritual hosts of wickedness... Therefore take up the whole armor of God, that you may be able to withstand..." Eph 6:12-13

"Yet in all these things in all these things we are more than conquerors through Him who loved us. For I am persuaded that neither death nor life, nor angels nor principalities nor powers...nor any other created thing, shall be able to separate us from the love of God which is in Christ Jesus our Lord."  Rom 8:37-39

Part 5: Behind the Peaceful Scenes of Christmas

Part 6: The Misguided Aims of the Counterfeit Church

Part 8: Rising Persecution in the "Land of the Free"

Part 10: A Devious Plot for a Blinded Nation

1. Voice of the Martyrs, Special Issue, 2011.(It arrived in September 2011. For safety reasons, it included no personal details concerning the Laotian woman.) http://www.persecution.com

5. The Rosicrucian Order: Our Traditional and Chronological History: "As part of this great renewal, the renowned Sir Francis Bacon (1561-1626), English philosopher, essayist, and statesman, directed the Rosicrucian Order and its activities both in England and on the continent...Later such eminent Americans as Benjamin Franklin, Thomas Jefferson, and Thomas Paine were intimately connected with the Rosicrucian community. In fact, many Rosicrucians played an important role in the great alchemical and social process leading to the founding of a new nation." See also The Masonic One Dollar: Fact or Fiction?

8. From keynote address to the Association for Childhood Education International (Denver, April 1972) by Dr. Chester M. Pierce, Professor of Education and Psychiatry in the Faculty of Medicine at Harvard University.