In early 2007 the government of the United Kingdom sent copies of Al Gore's global warming DVD, An Inconvenient Truth, to all secondary schools in England, Wales and Scotland. This action was part of a nationwide "Sustainable Schools Year of Action" which had been launched in 2006.

Showing the Gore DVD in UK public schools was challenged in the courts, however, on the basis that the schools are legally forbidden to promote partisan political views and that UK schools are required, when dealing with political issues, to provide a balanced presentation of opposing views.

Presiding court judge, Michael Burton, ruled that the Gore film contains numerous errors made in "the context of alarmism and exaggeration." As a consequence, said Judge Burton, the film could be shown only on the condition that it be accompanied by guidance notes to balance Gore's "one-sided" views in order to point out that the film's "apocalyptic vision" was not an impartial analysis of climate change.

At the same time, however, Gore's movie of "alarmism and exaggerations" has been shown, and continues to be shown, in countless American schools-shown to children at all grade levels not just high school-and shown without any warning labels whatsoever.

In this way our school children are being subjected to a massive propaganda campaign of the global warming fanatics. Such programs are not intended to educate our children but rather to indoctrinate them with the attitudes, values and beliefs of the leftists.

The UK distribution of the Gore DVD was part of a "sustainable development" education program. Citizens worldwide need to become informed about what "sustainable development" actually means. It is not about conservation or genuine environmental protection. It is really about ideology and politics; it means indoctrination programs in our schools-not geared to protect our environment but only intended to advocate the agenda of the big government global leftists.

The Earth Charter clarifies what the term "sustainable development" means in our world (www.earthcharter.org). The Earth Charter indicates that "sustainable development" means legalized abortion, gay rights, eliminating the right to bear arms, promotion of New Age/Pantheism, advocating global government and using our education system to indoctrinate children in all the political attitudes, values and beliefs mentioned above.

The Earth Charter is the common statement of faith agreed to by the major environmental groups worldwide and by the UN. The Earth Charter calls on all nations to carry out education for sustainable development (as the Charter defines the term).

"Our society has undergone profound economic, demographic and social transformation-a transformation that impacts virtually every aspect of our individual and collective lives."

McCune says that education also must be "transformational" in nature; that is, education must focus on changing the attitudes, values and beliefs of the child to match the worldview of the radicals. Education is no longer about learning the knowledge and skills necessary for a free society.

Because our children are being indoctrinated into radical environmentalism, they do not learn the new information that contradicts the global warming fantasy. For example, over the past few years several ancient maps have been discovered that picture Antarctica ice-free at least in part. One such map, drawn by well-known French map-maker Oronteus Finaeus in 1531 is pictured here:

There is no serious question about the authenticity of this map. It pictures the globe from the perspective of the Antarctic South Pole, long before Antarctica was supposedly discovered. It also clearly shows South America, Southern Africa and Madagascar. The coastline of Antarctica is pictured as being ice-free with inlets, bays, rivers and mountain ranges. The map is extraordinarily accurate. In all likelihood, people were living on Antarctica at the time the source-maps for the Finaeus map were drawn. (Two other recently discovered ancient maps also show all these features.)

What do such maps tell us? They demonstrate that at the time some of the source-maps were drawn, around 500 B.C., Antarctica was at least partially ice-free and people were sailing there and exploring the continent extensively. They were also making maps that were highly accurate. They were additionally exploring South America-long before the time of Columbus.

This is exciting stuff-the kind of information that makes education in world history absolutely fascinating. But our children will never learn any of this in school. Why not? Because it contradicts the global warming fantasy. When the Finaeus source-maps were drawn, the earth was obviously much warmer than it is today. The earth was substantially warmer long before any fossil fuels were being used to any significant extent, long before people were releasing carbon dioxide into the atmosphere. This means that global temperature change results from something other than carbon dioxide.

The chart below reveals other important information our children will never learn in school. The chart, based on well-known information from the UN's panel on climate change, reveals that the Earth's climate was about 4 degrees Celsius warmer 1,000 years ago than it is today. Once again, this warm period took place before we were burning fossil fuels. This warm period one thousand years ago was the time when the Vikings settled Greenland (which they called "Greenland" because it was green, at least close to the coast, not ice-covered as it is today.) It was also the time when the Vikings sailed to North America which they could accomplish in the warmer climate of that time.

If carbon dioxide is not the cause of global warming, then what is? The following chart, from the National Oceanic and Atmospheric Association, reveals that sun spot activity is the real cause of global warming. Notice the close correlation between sun activity and global temperature. Sun activity is the primary reason the globe has experienced far warmer, and colder, periods in the past as compared to today, as revealed in the following chart: 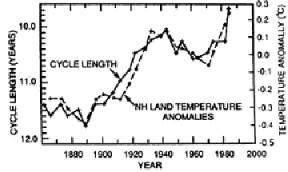 As is obvious from the chart, global temperature variation is primarily the result of sun activity. This cause-effect relationship explains why global temperatures have varied far more in the past, long before human beings burned fossil fuels, than in the past several hundred years. Once again, this is important information our children will never learn in school the reason being it contradicts the global warming fraud. Our children are not being educated, they are being indoctrinated. They are being subjected to transformational education-propaganda intended to mold their attitudes, beliefs and values to match that of the radical left.

* For more information on the battle for freedom in our schools, see the author's book: America's Schools: The Battleground for Freedom, EdWatch, 2005.

Ed Watch
EDUCATION FOR A FREE NATION
105 Peavey Road, Suite 116, Chaska, MN 55318
952-361-4931 http://www.edwatch.org
Email: edwatch@lakes.com
EdWatch is entirely user-supported. The continuation of our research and distribution work is entirely dependent upon individual contributors. If you want to assure that our work continues, click here.  If you want to subscribe or unsubscribe to this EdWatch e-mail service, mail to: edwatch@lakes.com.  Put "subscribe" or "unsubscribe" in the SUBJECT of the message. Resources of videos, books, and audiotapes are available on our shopping cart.

Popular pages at EdWatch.org: In the News: EdWatch Speakers in radio, print, and internet