– Manly P. Hall, Lectures on Ancient Philosophy, p. 356. (Manly P. Hall was one of the most influential occultists of the last century. He was recognized as a leading figure in the quest for mystical knowledge, and is considered one of the greatest Freemasons of the last one hundred years.)

Pentacles and pentagrams are considered to be two of the most powerful symbols within the world of occultism and witchcraft. They can be seen throughout our modern society, being used as ear-rings, necklaces, on posters, banners, and certain magazine and CD album covers. You can see them in New Age bookstores and in the occult sections of major book retailers such as Barnes and Noble. I’ve personally seen these symbols on t-shirts, organizational letterheads, brochures, billboard advertisements, tombstones, and within movies and television shows. Pentacles and pentagrams can be found all over.

The physical differences between the pentacle and pentagram are minimal. Pentacles are up-right five-pointed stars within a circle, pentagrams often have the point facing down. Within the occult, they supposedly have opposite spiritual properties. From a Christian viewpoint, however, both symbols represent forces that oppose Biblical truth.

From an occult perspective, pentacles are representative of "white" magic and "good." It also represents man’s intellect and reason. Often times pentacles are used as talisman–inanimate objects laced with psychic powers. Pentacles also represent the "feminine element Earth." Following this "Earth" line of thinking, one particular advocate of witchcraft equated the up-right star with the "ability of bringing Spirit to Earth," stating that it is "what makes us whole."

According to the teachings of the Hermetic Order of the Golden Dawn, an occult society founded by high-ranking Freemasons and active Rosicrucians, the up-right star represents "man with his arms and legs extended adoring his Creator, and especially the dominion of the Spirit over the four elements, and consequently of reason over matter." The Golden Dawn used this symbol as a tool to invoke and evoke "spirits"–-in actuality, to summon demons.

According to The Donning International Encyclopedic Psychic Dictionary, the pentagram is the "most powerful symbol of all ceremonial rites…" [this encyclopedia correctly views pentacles as a form of pentagram]. The Encyclopedia ascribed to this symbol the powers of active and passive spiritual "shielding," the "five wounds of Christ," and the notification of "etheric world intelligences."

Eliphas Levi, one of the most influential magicians of the 1800’s, wrote in his massive volume on transcendental magic,

"The Pentagram signifies the domination of the mind over the elements, and the demons of air, the spirits of fire, the phantoms of water and ghosts of earth are enchained by this sign. Equipped therewith, and suitably disposed, you may behold the infinite through the medium of that faculty which is like the soul’s eye, and you will be ministered unto by legions of angels and hosts of fiends."

Dangerous, dangerous stuff. Even the Hermetic Order of the Golden Dawn, in discussing the "Ritual of the Pentagram" (the up-right version) warns against making the mistake of employing the upside-down star, "See that thou doest it not" (italics in original). No wonder Helena Blavatsky, mother of the New Age, wrote in her book, Studies in Occultism, "there are secrets that kill in the arcana of Occultism…" (italics in original). It may seem strange that prominent occultists and occult societies would sound caution when using certain symbols. But understand, these men and women have seen and experienced powerful supernatural forces. And they are in bondage to them.

Going deeper yet, the upside-down star/pentagram has long been recognized as the symbol of Satan. Anton LaVey, author of the Satanic Bible and The Satanic Rituals, lavishly used this symbol in his ceremonies and rituals–most often depicted as the "goat’s head."

The fact that LaVey chose the goat-headed pentagram as the mascot symbol for the Church of Satan is no surprise. As previously mentioned, occult symbols have been used for centuries. In fact, LaVey gives credit to these more ancient occult schools for the role they played in helping him develop his Satanic ritual work,

"Satanic Ritual is a blend of Gnostic, Cabbalistic, Hermetic, and Masonic elements, incorporating nomenclature and vibratory words of power from virtually every mythos." (The Satanic Rituals, p. 21)

The Order of the Eastern Star, a mixed-member branch organization of Freemasonry (both females and males are allowed to join), uses the upside down pentagram as their principle symbol. In fact, during their rituals, the floor of the OES lodge has a giant pentagram laid upon it–most often in the form of a large area-like throw-rug. All of the Order’s major initiations and ritual work are done inside this pentagram or while trace-walking around it. Before they take their "obligations of secrecy," first-time Eastern Star initiates have their eyes "veiled" and are led around the points of the pentagram. Whether naively or intentionally, members of the OES are playing with spiritual fire, and Christians who are involved with the organization need to get out.

The last two pentagrams are the symbols of the Order of the Eastern Star. Their lodge floor is laid out in exactly this manner. Notice the altar in the middle with the Bible placed upon it. (Note also that the letters F.A.T.A.L. are found within the inner pentagon. This letter arrangement is meant to represent "Fair Among Thousands Altogether Lovely." I find it interesting that it obviously spells "FATAL.") 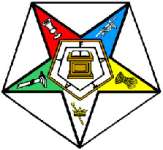 We need to keep in mind that our battle is not against flesh and blood, although flesh and blood are used by the forces of evil. But our ultimate battle is against the spiritual principalities of Lucifer’s dark army. Will we take up our spiritual shield and sword? Are we willing to use God’s Holy Word as the divider of truth and error?

Finally, my brethren, be strong in the Lord and in the power of His might. Put on the whole armor of God, that you may be able to stand against the wiles of the devil.–Ephesians 6:10-11.

"Finally, my brethren, be strong in the Lord and in the power of His might. Put on the whole armor of God, that you may be able to stand against the wiles of the devil." Ephesians 6:10-11.

Carl Teichrib is a Canadian based researcher on the occult and globalization. During the years 2000 and 2001, he was Director of Research for Hope For The World, the ministry of Gary Kah, and continues to work closely with this organization. Carl’s material has been published in a variety of newspapers, magazines, and newsletters.

Symbols and their meaning