I heard no laughter while watching The Hunger Games on opening day. Just sober silence. This teenage movie -- set in a totalitarian world that supposedly replaced a broken America -- shows the grim struggle for survival in a world without God, hope or meaning. The only "higher power" is a heartless government that supplies its own choice of artificial thrills and trials. And the people suffer.

The book behind the movie was published by the prominent Scholastic. It brought us the Harry Potter series and countless other books promoting witchcraft and the occult. By marketing its books through our education system, Scholastic may have done more to distort history, mythologize truth and promote moral and spiritual corruption among children than any other publisher.

If you have children in public schools, they probably read the Weekly Reader, which offers news and current events from a strictly non-Christian perspective. It's publisher, the Weekly Reader Corporation, is owned by Scholastic. This 1990 message illustrates its earth-centered propaganda and twisted view of history:

"Give Thanks to the Earth: The first Thanksgiving feasts were harvest festivals.  People gathered to celebrate successful harvests and to thank the Earth for its fruits. You can celebrate the earth every day by always taking care of the environment."[2] Scholastic News

Decades before the birth of the United Nations, some of the globalist leaders that launched the Federal Reserve called for a radical new agenda for America's children. With support from several Carnegie foundations, John Dewey prepared a socialist foundation for the new system. As the first president of the American Humanist Association, he was determined to replace Christianity with pluralistic values that fit the global agenda.

Ponder their goals, which are fast changing our schools, churches, families and values:

1917: "..they [the Board of Trustees of the Carnegie Endowment for International Peace] came to the conclusion that, to prevent a reversion, they must control education. Then they approached the Rockefeller Foundation and they said, 'Will you take on the acquisition of control of education as it involves subjects that are domestic in their significance? We'll take on the basis of subjects that have an international significance..' And it was agreed....They decided the key to it was the teaching of American history, and they must change that."[3]

1970: "...absolute behavior control is imminent.... The critical point of behavior control, in effect, is sneaking up on mankind without his self-conscious realization that a crisis is at hand. Man will...never self-consciously know that it has happened."[4] Professor Raymond Houghton  (More illustrations here)

1989: "What's happening in America today... is a total transformation of our society. We have moved into a new era....We no longer see the teaching of facts and information as the primary outcome of education.....What we are facing is  a total restructuring of society!"[5] Dr. Shirley McCune, Senior Director with the Mid-continent Regional Educational Laboratory, a leading (occult) Theosophist speaking at 1989 Governor's Conference on Education [see this very revealing video]

1994: "We have actually been given a course in how not to tell the truth. How many of you are administrators? You've had that course in public relations where you learn to put the best spin on things."[6] Dr. Jim Causby, North Carolina Superintendent, speaking at the 1994 Second Annual Model School Conference, in Atlanta, Georgia.

Aldous Huxley was well aware of those plans. After all, his brother Julian Huxley became the first Secretary General of  the United Nations Educational, Scientific, and Cultural Organization (UNESCO). In Brave New World, he told us that a profusion of new suggestions would transform beliefs and attitudes:

Backed by the authority of the United Nations with its hatred for the Bible, Julian Huxley wrote the following in his 1947 book, UNESCO: Its purpose and Its Philosophy:

"In pursuing this aim, we must eschew dogma.... East and West will not agree on a basis of the future if they merely hurl at each other the fixed ideas [of which the Bible is the main obstacle] of the past. For that is what dogmas are -- the crystalizations of some dominant system of thought of a particular epoch..... If we are to achieve progress, we must learn to uncrystalize our dogmas."[8]

Today our government and educational establishments seem more than willing to implement this agenda and punish any parental resistance that get in their way.

The Fictional History Behind the Hunger Games (See our book review).

Let me warn you: the movie is just as seductive as the book, perhaps more so, since the written message is joined to unforgettable visual images. It draws its fans into the oppressive, futuristic nation called Panem (from "Panem et Circenses" meaning "Bread and Circuses") that supposedly replaced America. The current dictator rules Panem's 12 Districts from the mighty Capitol somewhere in the Rocky Mountains. With well-trained underlings to fulfill his commands, he can monitor the masses, manipulate weather, and quench revolts initiated by the poor, discontented serfs.

The fictional history tells us that the Hunger Games began in the wake of a revolution seventy-five years earlier. Each year since then, twenty-four young Tributes  -- ages twelve through eighteen -- have been chosen by lottery in each of the 12 Districts. They will be trained  to kill, then transported to a selected area -- probably in the Rockies. Their only assignment is to try to survive by killing each other. At the end, the sole survivor will be celebrated as a national treasure and a promotional puppet.

The surreal purpose of this annual event is to control, not entertain, the masses. Panem's yearly battle sows fear, not cheer, even though the rulers demand celebrations. Does that remind you of the Roman Coliseum where trained gladiators and faithful Christians fought to death as huge crowds celebrated?

The main character is sixteen-year-old Katniss who lives with her mother and twelve-year-old sister, Prim, in District 12, the poorest in the land. Since her father died in a coal mine explosion, Katniss has been the family's sole provider. Day after day, she and her friend Gale hunt rabbits and gather herbs and berries on forbidden government land.

But everything is about to change. In the lottery leading up to the games, the terrified Prim is chosen. Stunned, Katniss quickly volunteers to take her sister's place. Peeta Mellark, who had long had a crush on Katniss, is chosen next.

After the required time of training, prepping and promotion at the Capitol, Katniss and Peeta are brought to the battlefield. On the first day, eleven of the twenty-four Tributes are killed. Most of the others race into the nearby forests to seek water and shelter from rain and from each other.

Meanwhile, the sophisticated high-tech Gamemakers back in the Capitol keep busy pointing their hidden cameras toward the injured, the dead, and the most popular players. Those images are shown on sophisticated tele-screens across the country. The goal is to unify, pacify and intimidate the viewers into ceaseless loyalty and compliance.

It reminds me of a statement in the book, Amusing Ourselves to Death, by Neil Postman who anticipated today's rise of Marxist values. To illustrate mental manipulation, he compared two familiar books: Aldous Huxley's Brave New World and George Orwell's 1984:

"Orwell feared we would become a captive culture. Huxley feared we would become a trivial culture, preoccupied with some equivalent of the feelies.... [In 1984] people are controlled by inflicting pain. In Brave New World, they are controlled by inflicting pleasure. In short, Orwell feared that what we hate will ruin us. Huxley feared that what we love will ruin us."[9]

Both have a point. Today, the cultural war against Christ and His Church is being waged on both fronts. The minds of most contemporary teens are bombarded with seductive images and suggestions that mock God's values and scorn Christianity.

A Glimpse of the Action

Near the end of the battle, the voice of a Gamemaker is broadcast to the final contenders, calling them back to their starting place. Emerging from the forest, Katniss and Peeta confront a new set of foes: twenty-one fierce, furry, four-legged "mutants" who seem eager to eat them. The book suggests that these "mutants" might be the twenty-one victims brought back to life in new but identifiable animal bodies:

"The mutts are beginning to assemble....There’s something else about them, something that makes the hair rise up on the back of my neck... They are unmistakably human. ... The blonde hair, the green eyes, the number ... it’s Glimmer [one of the dead Tributes]. I fire into its throat. Its body twitches and flops onto the ground... [Glimmer's second death?]

"The small one with the red coat and amber eyes... Foxface! And there, the ashen hair and hazel eyes of the boy from District 9 who died as we struggled for the backpack! And worst of all, the smallest mutt, with dark glossy fur, huge brown eyes....Teeth bared in hatred. Rue! [She was a sweet, twelve-year-old girl before she was killed]...

"Have they been programmed to hate our faces particularly because we have survived and they were so callously murdered?"[10]

Perhaps the moviemakers chose to ignore the mystical changes that turned a red-haired girl into a red-furred monster with glaring eyes and sharp teeth. But the scene fits right into the mythical tales and occult phenomena of ages past. Remember, human history is full of cultural and spiritual cycles that show what happens when a civilization that has been blessed by God rejects Him and embraces other "gods" and deceptive snares. 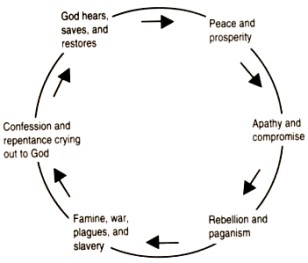 God's Way to His Shelter

The signs of change are all around us, and we already see some of the devastating consequences: broken families, immoral lifestyles, hopelessness, despair and suicides. Many seek temporary relief in the countless artificial fantasy worlds of digital entertainment. Many are addicted to sensual stimuli or trapped in the forces of darkness and find no way to escape!

Their struggles serve as a wake-up call to many of us. How can we (parents and grandparents) guard and guide our children through the dangers ahead?

Here are a few suggestions: These charts may be helpful: New Emphasis in Schools and Culture, Three Sets of Meanings of Educational Buzzwords, and Checklist for the family.

As our children learn to see all things from God's perspective, they will accept what is true and good but reject what is false and wrong. Remember,

"...be strong in the Lord and in the power of His might....For we do not wrestle against flesh and blood, but against principalities, against powers, against the rulers of the darkness of this age....Therefore take up the whole armor of God, that you may be able to withstand in the evil day, and having done all, to stand."

"Thy word have I hid in mine heart that I might not sin against thee."

Twilight Obsession | The Armor of God

C. S. Lewis: How mysticism & the occult are changing the Church

3. Norman Dodd reported these findings in an interview with the writer, William H. McIlihany II, for his 1980 book, The Tax Exempt Foundations (Arlington House, Westport, USA), p. 60-61. The Special House Committee to Investigate Tax Exempt Foundations reported in 1954. It was named after its chairman, Representative, B. Carrol Reece of Tennessee.

6. Dr. Jim Causby, North Carolina Superintendent, speaking at the 1994 Annual Model School Conference, in Atlanta, Georgia. Documented by Cynthia Weatherly,  The Christian Conscience (January 1995); 36. According to the website for the International Center for Leadership in Education [which no longer contains the old information] Causby “has made his district a national leader in (1) Character Education, (2) Total Quality Managemen, (3) use of application-based instruction and (4) community involvement.” More about Dr. Causby here: Education for Sustainability and Education Consulting Group.