The Hunger Games are far more than a fictional fantasy. They serve as warnings that illustrate the corruption of our human nature and the duplicity of today's trusted leaders.

In the first book, the deadly games ended with two winners instead of one: Katniss and Peeta. They had disobeyed the rules; each refused to kill the other. The masses loved it, but President Snow was furious. Instead of building solidarity, the games had fueled a growing rebellion against the wealthy and well-armed Capitol, the control center of Panem.

In the third book,[2] the seventeen-year-old Katniss becomes the symbol of the rising rebellion. Dressed in her triumphant Mockingjay uniform, she is televised and celebrated across the country by rebel leaders.

In the end, the rebels win. But it's a sad victory!  Coin, the female rebel leader proves to be more corrupt than Snow, her predecessor. And when she gains control of the nation, Katniss is no longer wanted and kept out of sight.

Human history is full of such outcomes. The Soviet Union is a good example. Most of Lenin's revolutionaries were eventually killed by Stalin, who tolerated no competition. In England, where elite financiers funded the Bolshevik revolution, only a few voices dared speak up in alarm. George Orwell may have been one of the most effective critics of Soviet communism and its British supporters.

Aldous Huxley was more subtle. The powerful Huxley family had long been steeped in the socialist vision of a totalitarian world government, and his brother Julian became the first head of the United Nations Educational, Scientific and Cultural Organization (UNESCO). Remember, Alger Hiss, the communist who advised President Roosevelt to cede eastern Europe to Stalin (Yalta, February 4-11, 1945). Some months later he presided over the first gathering of the United Nations in San Francisco.

Neil Postman, who wrote "Amusing Ourselves to Death", understood their goals and strategies well. To illustrate brainwashing, he drew an interesting contrast between Huxley's Brave New World and Orwell's 1984:

Postman's insights fit our times. Today's spiritual war against God, His people and their freedom is being waged on both fronts. The oppressive assaults on liberty, privacy and traditional values fit Orwell's vision. The flood of images and suggestions that distort beliefs, twist values and trivialize Christianity, fit Huxley's vision.

Yet, while Orwellian oppression intimidates the masses into silence and conformity, its terror also awakens faith and stirs resistance. In contrast, Huxley's "feelies" simply dull our thinking and distract our attention until myth and trivia become the norm, while Biblical conviction becomes an intolerable expression of deviance and extremism.

The Discarded Mockingjay and Her Sad Reflections

Badly burned in a fiery explosion that killed her sister, Katniss tries to understand what happened. The final battles between the Rebel forces and the Capitol have blurred together in her tormented mind. Who did what? Why? Nothing made sense!

She agonizes over the lies and deceptions -- especially the unconscionable killing of countless innocent children:

"That a Capitol hovercraft manned by rebels bombed the children to bring a speedy end to the war. But if this was the case, why didn't the Capitol fire on the enemy? Children are precious to 13, or so it has always seemed. Well, not me, maybe. Once I had outlived my usefulness, I was expendable.

"And why would they do it [bomb the children] knowing their own medics would likely respond and be taken out by the second blast? They wouldn’t..."[p.359-360]

But that doesn't make sense either! As she keeps seeking answers to the horrible violence, she suddenly realizes the truth.

"...there’s [Snow's] assessment of [rebel leader] Coin. What’s irrefutable is that she’s done exactly what he said. Let the Capitol and the districts run one another into the ground and then sauntered in to take power."

"I recall Boggs’s response when I admitted I hadn’t put much thought into Snow’s successor. 'If your immediate answer isn't Coin, then you’re a threat. You’re the face of the rebellion....”

When Snow is removed, Coin, the calculating rebel leader, takes over -- but not for long. Though still medicated, Katniss is well enough to attend the inauguration of the new president. For her, the war had not yet ended:

"I...grasp the arrow. Position it.... I release the string. And President Coin collapses over the side of the balcony and plunges to the ground. Dead."[p.372-373]

"Why am I not dead? I should be dead. It would be best for everyone if I were dead.... Jumping to my death’s not an option—the window glass must be a foot thick. I can make an excellent noose, but there’s nothing to hang myself from. ...I’m sure I’m being watched round the clock. For all I know, I’m on live television at this very moment....The surveillance makes almost any suicide attempt impossible....

"What if they’re not going to kill me? What if they have more plans for me? A new way to remake, train, and use me?...

"Snow thought the Hunger Games were an efficient means of control. Coin thought the parachutes [the explosives that killed the children] would  expedite the war. But in the end, who does it benefit? No one." [p.375-377]

A short trial is held, and Katniss is released to go "home." A plane brings her back to District 12, then she travels by cart through her devastated home region:

"As I near the ruins of my old house, the road becomes thick with carts. The Meadow’s gone, or at least dramatically altered. A deep pit has been dug, and they’re lining it with bones, a mass grave for my people...

"We learn to keep busy again....A few hundred others return because, whatever has happened, this is our home. With the mines closed, they plow the ash into the earth and plant food. Machines from the Capitol break ground for a new factory where we will make medicines...."[p.385-388]

War is horrible! But that fact is easily forgotten by those who have spent their lives in the safety of America. In contrast, Eastern Europeans who suffered through the consecutive reigns of Hitler and Stalin may never forget! (See the Bombing of Dresden and Soviet depravity)

But There Is Still Hope!

How dark and deceptive the world is without God! The people of Panem think and act like hopeless people today. Those who dare take a stand against evil may win for a season. But freedom without genuine faith never lasts long. Today's battles against Biblical Christianity illustrate the problem. And the natural result is cultural corruption and crumbling liberty. If only our leaders would follow these guidelines:

"Jesus said... 'If you abide in My word, you are My disciples indeed. And you shall know the truth, and the truth shall make you free.'" John 8:31

The world's pagan cultures have always included some kind of occult or unbiblical worship, but so has Western culture. The historical list of idols is endless: the sun, moon, trees, rocks, fictional gods, politicians, kings, talented singers, beautiful entertainers, military leaders... or simply oneself. [Twist of Faith, chpt.7]

Today's blend of human imagination and digital communication is fast multiplying that list. Do you wonder how many hours a week the average teen spends with his mind immersed in digital fantasy worlds featuring man-made idols that can be manipulated? How prepared will he or she be to handle the challenges ahead? 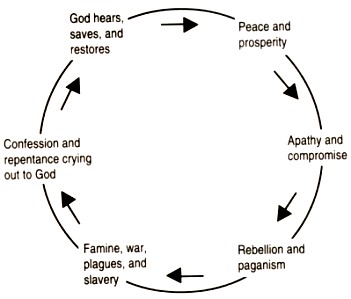 Alger Hiss co-authored of the UN Charter. The blueprint for America's replacement  was written over sixty years ago, but few ordinary Americans saw the danger. After all, our media and entertainment industries are masters at distracting the masses and creating feel-good fantasy versions of a Brave New World or the more Orwellian Hunger Games.

Huxley and Orwell illustrate two different kinds of seduction and tyranny. A seducer will blind and deceive us, while the tyrant may control our bodies but not our minds. Orwell's totalitarianism may seem more deadly, but Huxley's "feelies" and trivia is a far greater threat to clear thinking, moral values, biblical faith and the strength of our nation.

The pattern -- not the details --of  Israel's ancient history (on the right) will continue until the wonderful moment when our Lord returns.

"Therefore we do not lose heart. Even though our outward man is perishing, yet the inward man is being renewed day by day. For our light affliction, which is but for a moment, is working for us a far more exceeding and eternal weight of glory..." 2 Corinthians 4:16-18

"For the Lord Himself will descend from heaven.... And the dead in Christ will rise first. Then we who are alive and remain shall be caught up together with them in the clouds to meet the Lord in the air. And thus we shall always be with the Lord." 1 Thessalonians 4:16-17

Book 2, The Orwellian Theme Behind the Movie

A Chronology of the UN: The Revolutionary Steps to Global Tyranny