Deliver us from evil

by Andy and Berit Kjos

Why do terrorists detest America? Because, explained President George W. Bush in his recent message to Congress, "they hate our freedoms -- our freedom of religion, our freedom of speech, our freedom to vote and assemble and disagree with each other."[3] His list of God-given rights helped stir allegiance in grieving hearts from coast to coast. It also reminds us that those freedoms might be threatened from within our land by the proposed policies for fighting terrorists from outside our land.  America cannot afford to trade its treasured liberty for the world's vision of global security.

Yet, his list would be considered incomplete and misleading by many freedom-loving people from other lands. Consider these additional reasons for the terrorists murderous assault: envy of America's wealth, disgust at her materialism, resentment toward her military dominance, hatred for our support of Israel, and horror over the corrupting influence of her exported culture, outrageous entertainment and pornographic images. They see decadence in our post-modern culture, and the spirit behind their angry Allah guides their rage toward "holy" murder under the banner of a counterfeit good.

Signs of this fury mingles with sincere expressions of sympathy in many Muslim lands. Andy Kjos saw both sides while visiting missionaries in Pakistan during those life-changing days between the 11th and 17th of September. While many Muslims cheered the smoldering ruin of America's monument to global trade, others shared America's grief.

But in that distant land of friendly people, seething hostilities and divided loyalties, the crowds honored Bin Laden as their hero and saw terrorism as a legitimate response to the Western menace.  It's no surprise that a newly arrived missionary found a sobering warning painted on his front door: "Kill the Americans."

Some Pakistanis were simply misinformed. A taxi driver blamed Bill Clinton, not Bin Laden for the assault on the World Trade Center. The former president did it, explained the driver, because he couldn't be president again. In the absence of facts, propaganda rules.

But Americans face misinformation as well. Our foreign foes are not limited to Middle Eastern radicals or Bin Laden's al Qaeda.  A warning from U.S. security consultant Col. Stanislav Lunev, the highest-ranking military spy ever to defect from Russia, suggests a far more complicated picture. He filed this report from an undisclosed location in Europe:

"These [terrorist] groups clearly have received sufficient funds, supplies, support and hospitality from rogue nations – all of whom have close ties to Russia's military and intelligence agencies. Intelligence experts have told me that there are more than 5,000 highly trained terrorists in the U.S. and Europe who are in permanent readiness for new attacks against the civilized world. Now that we are in a full-blown war, the stakes are high for each side. No one can rule out that these terrorists may have biological, chemical and nuclear weapons." [4] "Bush Must Warn Rogue States of Nuclear Retaliation"

Yet the article, "In major shift, Russia backs U.S. use of ex-Soviet bases," tells us that "Russia essentially gave the go-ahead yesterday for U.S. armed forces to use three former Soviet republics as bases for attacks on Afghanistan, a dramatic reversal that indicated that the Bush administration was making headway in its global fight against terrorism."[5]  Are Russian leaders playing games with us? Might the main supplier to rogue nations want to lure American troops into another debilitating war of attrition? Consider this warning from Soviet veterans:

"Beginning in late 1979, the Soviet army spent 10 years in Afghanistan trying in vain to bolster an unpopular communist regime. It lost thousands of people but gained no control over the treacherous mountain land or the battle-hardened mujahedeen foe that the United States helped train and arm. Afghan resistance fighters -- including Osama bin Laden -- staged surprise attacks and took cover in the mountains and gorges that they, but no one else, knew by heart.

"Back home, hostility against the invasion grew, and in 1989, Soviet troops finally retreated from Afghanistan.... But before they left, the army sent home at least 15,000 body bags and hundreds of thousands of wounded, maimed, ill and emotionally scarred soldiers."[6] "Advice: Don't go there"

Do you hear the echoes of Vietnam?

"Please be on guard," urged Col. Stanislav Lunev. "America's military is already very weak after 10 years of significant cuts. Do not concentrate your forces abroad and leave them vulnerable to weapons of mass destruction that terrorist nations may now have."[5]

Where do you turn in the face of these evils? To national governments? To the United Nations? Or to God?

The natural sources of reassurance in this time of crisis are our president, leading politicians and a post-modern image of a sympathetic God. We have watched patriotic expressions and political promises blend with multicultural prayers and affirmations of oneness. We have heard our national leaders -- including some who approve of immorality and despise God's politically incorrect truths -- join in a choral petition that "God Bless America."

We want to believe that our key leaders try to follow His ways. Some are obviously constrained by the rules and expectations of a secular and compromising bureaucracy. The mainstream media doesn't help. When President Bush would call for prayer, the television station would shift to commentators.  To our leading media guides, God has become irrelevant. In spite of the well-spoken prayers and heart-felt sentiments, Americans have learned to see war and terrorism from a secular rather than a Biblical perspective. [See

"What else can we do?" you might ask. "After all, we live in a pluralistic world. Our laws and policies don't permit us to value Christian beliefs above other religions." [See America's Spiritual Slide and Isaiah 19:2-12]

That's true. As a nation, we are set on a course based on humanist values and a blend of religious expressions that may occasionally sound Christian but are designed to please everyone. As a nation, we trust government solutions rather than the God who established this great nation. And as a nation, we stand at the threshold of a new global government determined to manage and monitor humans everywhere -- and ready to use every crisis to win our consent for policies certain to destroy the freedoms that made America unique.

As Christians we are called to pray for our leaders, and so we must. But God doesn't promise to bless a nation that compromises truth, spurns His guidelines and profanes His name. He will hardly strengthen a nation that teaches its young to pursue promiscuity, ridicule His Word and delight in "other gods." [7]  He cannot be pleased with a land that that condones the mass murder of unborn babies and the worldwide export of blatant pornography. Instead, He warns us

When distress and anguish come upon you.

Then they will call on me, but I will not answer;

They will seek me diligently, but they will not find me.

Because they hated knowledge

And did not choose the fear of the Lord,

They would have none of my counsel

And despised my every rebuke.

Therefore they shall eat the fruit of their own way,

And be filled to the full with their own fancies.

For the turning away of the simple will slay them,

And the complacency of fools will destroy them;

But whoever listens to me will dwell safely,

Find hope in the last two lines. Christians need to take God's promises to heart, for the very real threat of escalating terrorism will continue to justify government control. Airport security, surveillance cameras, Facial Recognition Technology, and psychological profiling makes sense in light of the current crisis. It's hard to believe that the proposed terrorist laws and policies would ever be used against ordinary citizen -- those whose Christian beliefs and values clash with UN and U.S. standards for Mental Health.  But they could. For the "profile" of a terrorist reaches far beyond the nature of a militant murderer.[8] It could include you, me or any other law-abiding citizen who dares to question government policies or UN ideology. [See "A Terrorist? Me?" and "The Enemy Of The People?"]

It's easy to pray the words Jesus taught us: "Deliver us from evil." But those comforting words were never meant to stand alone. They are part of a prayer outline, a wonderful set of phrases that Jesus gave us in order to turn our hearts to the only One who can bring peace in today's turmoil. If you don't know them, you can find them in Matthew 6:9-13.

This prayer outline begins with, "Our Father who art in heaven, hallowed [considered holy] be Thy name" -- an acknowledgement that the heavenly Father who loves His children is indeed holy and perfect, worthy of our worship. He holds us accountable to His standard for holiness. Since, by our own strength and will,  we can neither understand nor follow that standard, He  enables us through the power of His Spirit given to those who believe.  The prayer continues with these familiar lines:

There are no national shortcuts to His victory. In Old Testament days, like today, people would imagine a God that matched their own wishful thinking. "You thought I was altogether like you," warned God in Psalm 50:21. Denying His nature and ignoring His truths, they lost sight of His love and forfeited His protection. He called, but they refused to come: 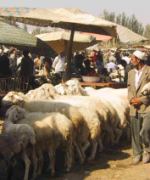 "In returning and rest you shall be saved;

In quietness and confidence shall be your strength."

Their leaders trusted their swift horses more than God's strength. "Therefore," God said, "those who pursue you shall be swift!" He raised up enemies that would outrun, overcome and humble the arrogant nation He had loved and nurtured.

Today we have yet another opportunity to hear His call and return to Him. But good intentions and nice-sounding sentiments won't suffice. We need to know His Word, confess our wrongs and follow His way, in spite of opposition, rejection and persecution.

"If My people," God assures us, "who are called by My name will humble themselves, and pray and seek My face, and turn from their wicked ways, then I will hear from heaven, and will forgive their sin and heal their land."

Freedom-loving people in other countries may see our errors more clearly than do we. A friend from Australia wrote,

"We cannot speak for terrorists, but we have seen the USA from the point of view of people from many other countries that are at the mercy of, for example, American Free Trade agreements, or American military might. They do not hate the freedoms of America -- in fact many of them long for the freedom that Americans have -- they hate the abuse of that freedom that is so patent to them and so invisible to Americans."[9]

In the midst of today's anguish, we hear many noble words but see little genuine repentance. Yet, whether or not our nation rejects His offer, you and I can accept it and find peace in Him. He alone is our Hiding Place in a hostile world and His arms are open wide to all who will come.

8. Conformity counts more than conviction in today's global community. That point was brought home in the president's popular speech on September 20.  "Either you are with us, or you are with the terrorists,"[3] he told Congress. President Bush was pointing to the world's nations -- not individuals. But if America's leaders still valued sovereignty and freedom, they would not force neutral nations -- those who prefer to distance themselves both from the horrors of terrorisms and from a seductive and immoral Western culture -- to give up theirs. Neither individuals nor sovereign nations should be intimidated into compliance with the new global ideology. [See "Trading U.S. Rights for UN Rules"]

9. See Your Comments: The War

See "What it means to be a Christian"