Painted by Pieter Bruegel in 1564 AD

Christ Carrying the Cross puts history's most amazing event into a context as relevant to contemporary America as it was to the Flemish masses back in the 16th Century. In this miniature version of Bruegel's massive painting, Jesus (in the center) is barely visible. That's part of Bruegel's message. For the crowds in the picture were as oblivious to the suffering Savior in their midst as the average person on a city street might be today. Their minds were on their games, on their petty arguments, on their mischievous children, on the stately guards and, especially, on the spectacle of the execution ahead. The identities of the accused mattered little. They never recognized the King who gave His life for them. 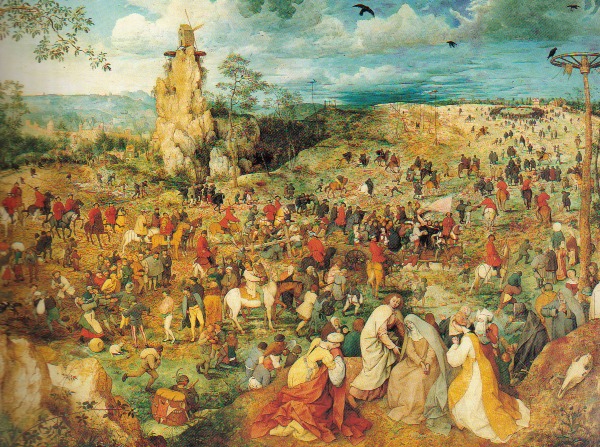 In Bruegel's time, the comparable social event was also the public execution. With the dearth of other exciting entertainment, it would draw huge crowds of thrill-seekers. In our times, the communal spectacle might be any number of real or dramatized events -- movies, television, as well as shocking news that capture the public's imagination and overshadow the wonder of knowing Christ.  So, in the midst our daily pressures, Bruegel reminds us how easily the familiar, the trivial, and the vulgar things around us can distract us from those realities that are most important to life, peace and joy.